Las Majadas Ranch was established by Edward Burleson Raymond. Raymond, the founder of Raymondville, was born November 12, 1848, in a log cabin on Congress Avenue in Austin. He was the son of a Republic of Texas Newspaperman, Nathaniel C. "Nat" Raymond and Lucinda Riggs Raymond. 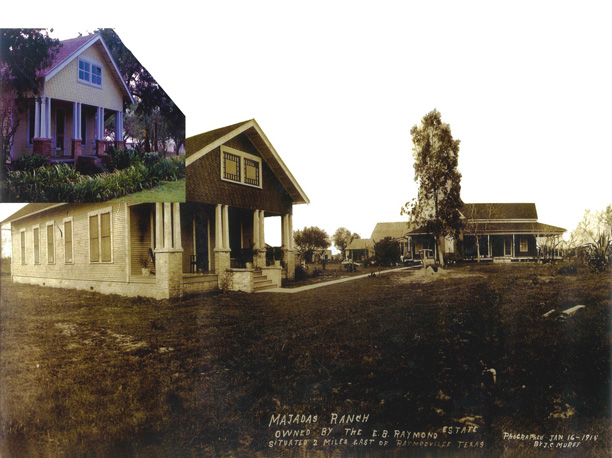 In 1870, Raymond borrowed a horse and saddle from his brother Charles, and set forth to seek his fortune in the so-called "Sand Country" and also known as "Wild Horse Desert". After herding cattle and horses uptrail to Kansas and Missouri, he met Captain Richard King. Captain King was very impressed by this young man's honesty. He hired Raymond to become the first foreman of El Sauz Ranch, the southern division of his holdings. Raymond managed El Sauz for thirty-seven years until his death in 1914.

Raymond purchased land for Captain King until 1882, at which time Captain King instructed him to cease buying land for him. Raymond then began to purchase land for himself. Being aware of the potential of the Rio Grande Valley, he developed a ranch of his own, buying up some 29,000 acres. This land was purchased from the heirs of Jose Narciso Cavazos, the original Grantee of the vast "San Juan de Carricicitos Grant" from the King of Spain. Raymond also bought land from William C. Chamberlain, a brother of Mrs. Richard King. Mr. Chamberlain had acted as a vendor for Raymond while he was acquiring land for Captain King, and they became fast friends.

The present Las Majadas Ranch was shown as "Majada" on the 1884 map of Cameron County. "Majada" is the Spanish name for "sheep fold" or "sheep grazing", and it is believed to be part of the ranch used to raise sheep. Raymond began to build a house in 1886, and also developed many crops such as Bermuda onion, the Raymond Orange, cotton, as well as cattle which he branded with his brand "The Pitcher".

This brand originated on a hot and dusty day when Raymond and his men were working cattle and had nothing to drink but hot and brackish water. Raymond looked up and said, I would give anything for a big pitcher of cool water from Barton Springs in Austin." and vowed if he ever owned his own herd of cattle, they would be branded with a pitcher. He registered this brand in 1882, and it has been in use since that time. 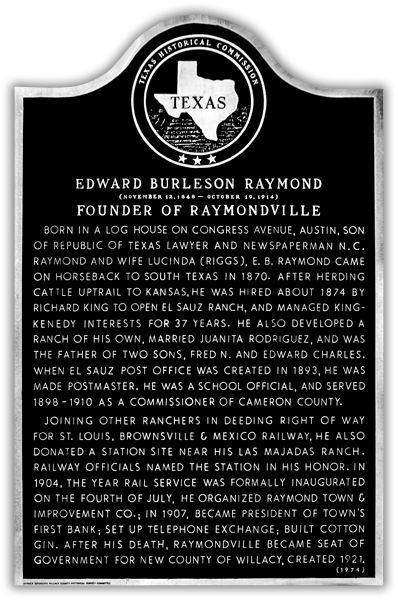 The ruts of an old road or trail can still be seen in front of the house on the ranch. This trail is one of the old salt trails originating at "El Sal de Rey" — the old salt lake west of Raymondville. Salt was transported by way of Las Majadas and various other ranches to Paso Real and then across the Arroyo Colorado to the Port of Bagdad at the mouth of the Rio Grande River.

When the railroad was built into the Valley in 1904, Raymond gave land for the right-of-way. Raymond’s northern border and King’s southern border ran right through the new townsite of Raymondville, which was established at mile 95. Raymond set up Raymond Town and Improvement Company to sell his part of the town, and the King Ranch set up Kleberg Town and Improvement Company to sell its half.

In 1889, the final decree of the San Juan de Carricitos partition suit confirmed Raymond’s title to 6,804 acres of land in which Share 36, the site of the present Las Majadas Ranch is located. Upon his death in 1914, the property went to his wife Juanita, and she lived on the ranch until her death in 1923, at which time the property was inherited by their sons, Fred and Ed. Fred sold his part of the holdings to Engleman Gardens and it became a large citrus orchard. Ed’s share included the present day ranch where he lived until his death in 1967.

Ed had built a home in 1915. He was married to his first wife, Roxanna Schmidt, and they had two daughters, Maydell and Doris. She died when the girls were only four and two years of age, respectively. They lived most of the time with their maternal grandparents.

Several years later, Ed Raymond married his second wife, Leonora Cavazos, an heir of Jose Narciso Cavazos, the original grantee of the land. From this union were born two daughters, Winifred and Frances, and they lived at the ranch until time of college and marriage. Leonora died in 1953 and Ed died in 1967.

Upon his death, his daughter, Winifred (Winnie), and her husband, Herman J. Wetegrove, purchased the ranch from the other heirs. Herman died in 1982. Winnie oversaw the ranch until her death in June 2015.

As a girl growing up in the brush country, Winnie became a skillful rider and an expert in South Texas brush country flora and fauna. She grew familiar with the behavior and character of South Texas wildlife. Winnie gained a deep appreciation for the native birds and animals of South Texas. Winnie loved the ranch, and it was her dream to turn this ranch into a wildlife reserve for many future generations to enjoy.